Home » Resources » Articles And Reports » The Gold Club Weekly Report » On the Rhine River with Ron! by The Wolff Couple

On the Rhine River with Ron! by The Wolff Couple

We were hoping for a glorious cruise through Europe. What we got was perfect weather, a gorgeous boat, wonderful service, and the best companionship ever! We got 8 exciting days with Ron LeGrand and his lovely wife Bev! We floated down the Rhine River together, touring some of the greatest cities, cathedrals, and castles in the world.  We’d been planning this European trip for a whole year, but we’d been looking forward to it since we were kids!

After a decade and a half of sailing the world on ocean cruises together, we were excited to finally check out River Cruising! The biggest difference is the size of the ship. It’s been common for our ocean cruises to host over 1500 passengers. Our boat here was much more intimate with only 152 folks! Our great travel agent Kim had arranged a terrific cruise line (AMA Waterways) and a luxury boat, the “AmaKristina”.

We were hoping for a smooth flight over the ocean. What we got was our annual Platinum upgrade, which means we got those sweet “overseas” first-class seats that lie all the way down! After 14 total hours in the air we woke up in the clean and cosmopolitan city of Basel, Switzerland.

We met up with our great friend and mentor, Ron LeGrand, and his wife of 53 years, Beverly! You know we love Ron and have worked side-by-side with him for over 15 years. We’ve also gotten very close with Bev over that time, we see her every time we visit Jacksonville, and we love our vacations together. We went to Cuba together last summer, then over Thanksgiving we went to Australia and New Zealand, and we even brought along our 3 kids (Dashel-27, Cale-24, Trinity-18). Beverly always lights up when she sees us (more Lynette than me, but I’ve pretty much gotten used to that by now)! 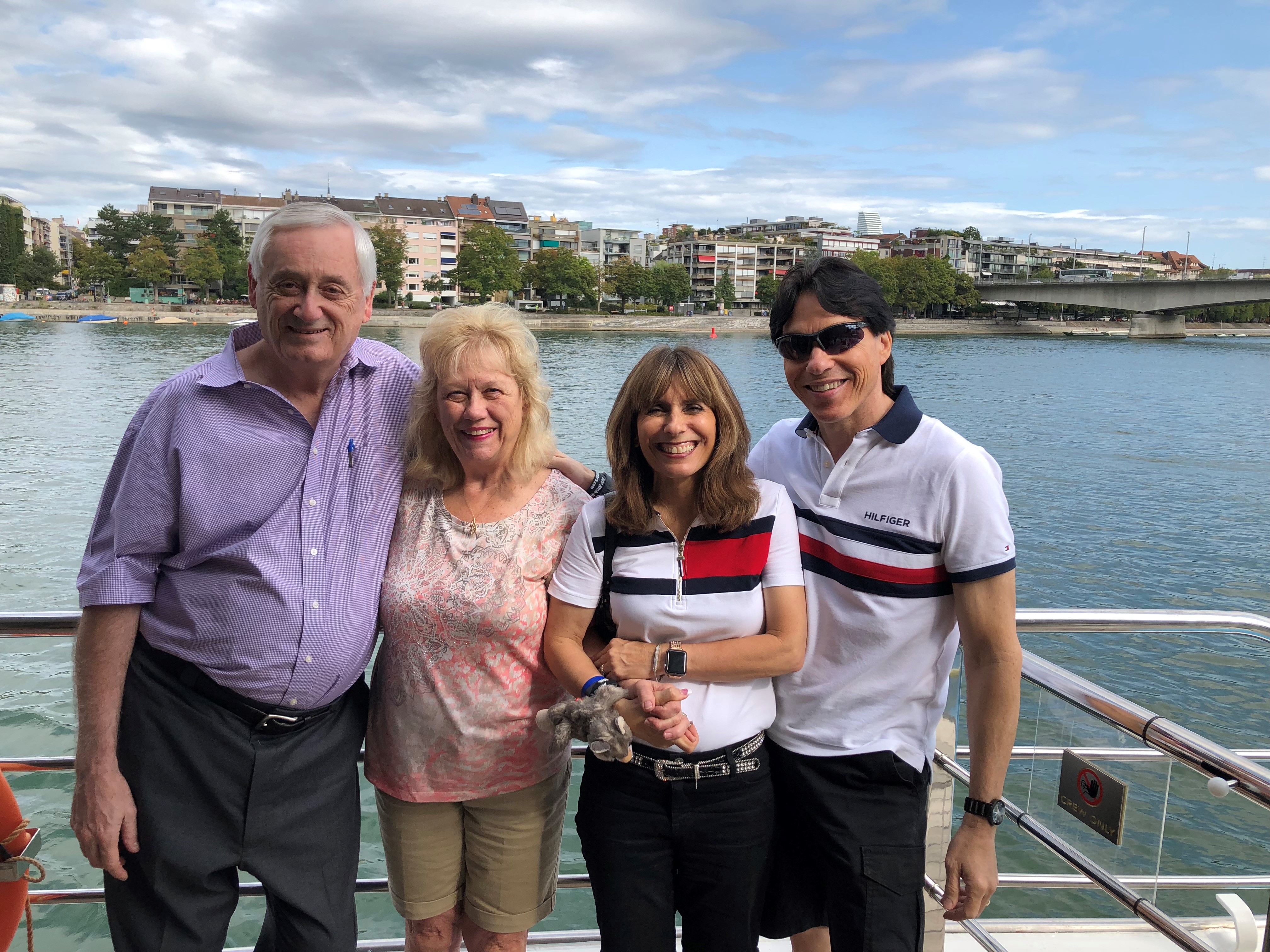 We spent our pre-boarding hours riding the free public transportation Tram (red and yellow in the pic), viewing the handsome city of Basel. We had time for a delicious lunch at a “Swiss Food” cafe, and also a little shopping. We hoped for some cool gifts for our friends and family. What we got was classic Swiss Army Knives from actual Switzerland! During the trip we ended up finding everybody really wonderful presents, including an oil reproduction of Van Gogh’s “The Starry Night” for Trinity.

We were hoping for a beautiful cabin on a luxury riverboat. What we got was 1 of only 4 spacious suites on the boat, and Ron and Bev got the one across the hall. We were just steps away from each other and, even more important, from our reserved dinner table! On ocean cruise ships it’s always a trek to get to the food. The cozy boat also felt nice and new, the “AmaKristina” is only about a year old!

We were hoping for good service. What we got was a terrifically friendly staff, attentive to our every need. The first crew member we met was the head waiter, Alex from Romania. Ron and us got to know Alex quite well, even giving him business advice during our “cigar time”. When Alex first saw Lynette’s “Wolffie” he went wild! He showed us he actually has a wolf as the screensaver on his phone!

If you haven’t heard about the Wolffie craze, we love giving out these adorable plush “hugger” dolls that cling onto your wrist (part of the proceeds go to saving real wolves, see the pics). Everyone loves and wants the Wolffies, so we literally brought dozens of them. Alex was the first delighted recipient. Before the end of the cruise many of the 50 crew members would have their very own Wolffie, and lots of grateful passengers too! 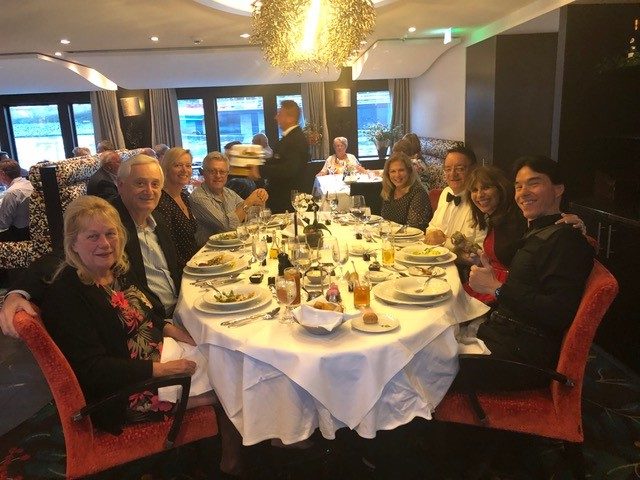 We were hoping for quality food. What we got was culinary excellence! At the first dinner we could tell (and taste) that the meals were going to be truly scrumptious! Delicious tenderloins, salmon, chicken, incredible sauces and irresistible desserts! Since we were heading through France we had hoped the food would be magnifique! C’est la vie!

A destination in France was on the schedule for our first excursion the next day. A smart new procedure nowadays is that the Cruise Director passes out free earbud units so you can always hear the local Tour Guide’s facts and stories. We headed off to a Medieval Village called Riquewihr (Rik-veer). This tiny hamlet was out of the path of the World Wars, so it stills stands pretty much as it was built in the 1600’s. Talk about a fairy-tale atmosphere, this was the actual village that Disney copied for Belle’s town in “Beauty and the Beast”! The pictures say a thousand words about this town that practically defines the term “quaint”. It was definitely like stepping back into the Middle Ages!

We were hoping to learn some history. What we got was many fascinating places rich with stories of the past. We had no idea how beautiful and historic Strasbourg, France was, with its ancient Gothic Cathedral sending spires hundreds of feet into the sky. The affluent area changed hands in wartime between France and Germany so many times over the decades and even centuries. It was fascinating how the Alsace culture there mixes the orderly and efficient German way of approaching life, and also the free-thinking and artistic French way. Brian has plenty of that German “systems” thinking, and also has that flair for the creative. That’s why this cultural balancing act holds such special interest.

The next day, August 30, was Brian’s birthday! We were hoping for a motivational experience. What we got was a totally unique and inspirational celebration — a stroll on the famous “Philosopher’s Path” overlooking Heidelberg, Germany! Revered and brilliant thinkers over the ages, including Mark Twain who spent many years there, have made this same striking hike. Perfect weather, a stunning view of the river valley and the castle, and sharing a “bucket list” moment – what a memorable birthday! Ron even bought me a great present, but it had to be shipped so I won’t be getting it for a couple weeks (I’ll let you know later what he got me). In Heidelberg they also have a world-renowned cancer treatment center, supported by “the German Bill Gates”, with an Ion Accelerator that is half the size of a football field!

We were hoping for no rain on the day we reserved the bikes. What we got was the best hazy sunshine of the whole trip as we cycled along the Rhine River and through the German wine country! The paths were clear, the sky glowed softly, the sweet fragrance of grapes wafted on the gentle breeze, and around each corner lay another postcard view. We even snacked on grapes from the actual vineyards. The whole afternoon seemed like a wonderful dream.

The city of Cologne, Germany was classic. These European cities are all filled with buildings and castles and churches that were built before our great-great-great-great- 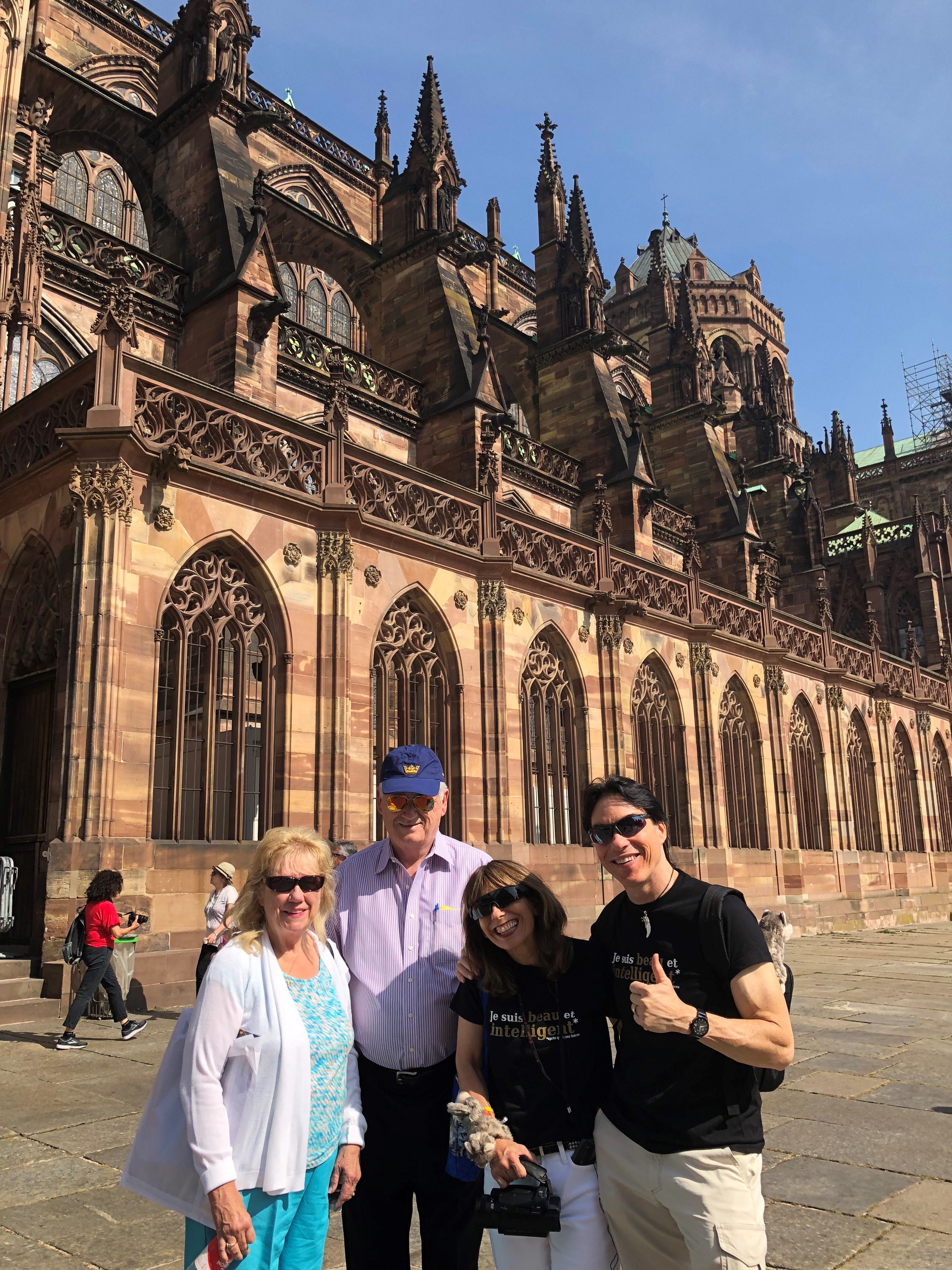 grandparents were even born. It makes you think – what can you leave behind that will stand the test of time? Unless you’re a famous artist or writer, and beyond your children, the answer is Real Estate. That’s what we’re looking at on these trips, Residential and Commercial Real Estate. The Tour Guide even talked about how one owner could barely afford to pay the property taxes on their land, and they may be forced to sell. There are Real Estate opportunities everywhere (although I don’t think we’ll be buying a German castle anytime soon)!

We were hoping for some wildlife interaction on camera. What we got was a lot of huge public squares in old European cities filled with hundreds of hungry pigeons. It was really fun playing with them though, it was just like in the movies!

We were hoping to see some cool castles. What we got was actually a “Parade of Castles” (we just made that name up, they should use it)! On the lengthy sail to our next port we were treated to a unique stretch of the Rhine River where there are more castles than anywhere in the world. From the expansive deck topside, we viewed over 30 towering castles clinging to craggy cliffs on both sides of the Rhine. It all seemed straight out of “Game of Thrones”!

We sailed into Holland the next morning. We were hoping to see windmills, cows, tulips, and wooden shoes. What we got was the cleanest countryside and some of the most scenic video we’ve ever recorded. The old windmills are there for show, but now they have huge wind turbines slowly rotating above the cows in the fields. Never did see any wooden shoes though!

Soon we anchored in Amsterdam! We took a walking tour AND a canal boat tour, and everywhere you look there is another captivating scene. The architecture is fantastic, and there is no better “people-watching” in the whole world. After dark we even had a stroll through the “Red Light” District, and you certainly see things there that you will not see anywhere else. We were hoping for a few novel sights and an entertaining story or two. What we got was that and much more, definitely an “R” rated experience!

After dinner every night we’d retreat to the upper deck and enjoy a couple cigars and some great conversation. Most nights we’d also spend a couple hours playing POKER! 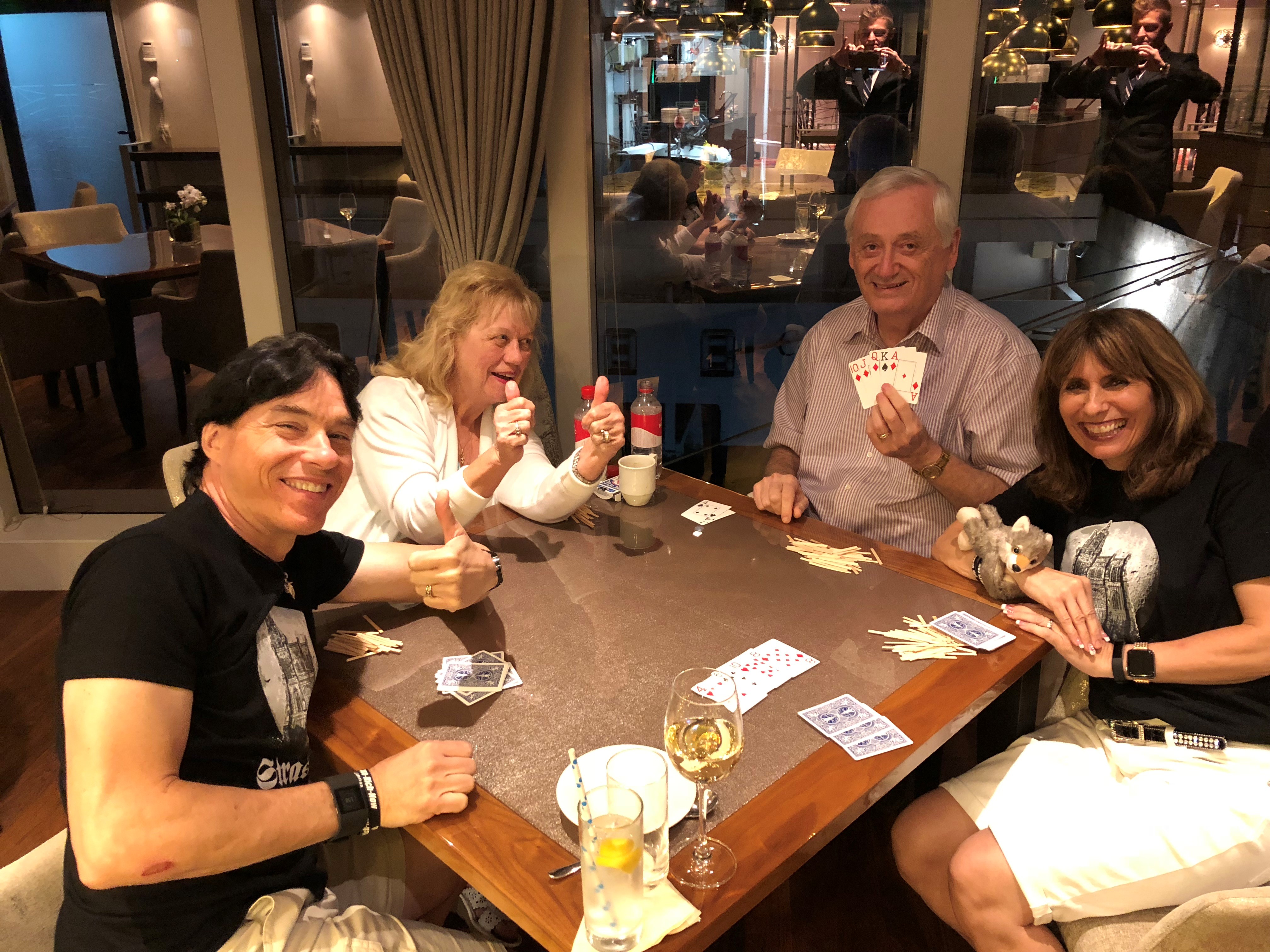 Bev is an expert at video poker, we’ve personally seen her win jackpots of $20,000, $40,000, she even won a Bentley once! In our penny-ante game the chips went back and forth, but with all those laughs and quality time together we were all WINNERS!

We were hoping to get a break from performing for cameras during the vacation. What we got was a totally unexpected video shoot on the boat! A cameraman was there to film for a show called “Dream Cruises” to be aired in a couple months. Now because we happened to have the best cabin, and we happen to look like we look, and happen to act like we act, of course he immediately asked us to be the main actors for his movie! Obviously, we said “no” right away, we explained we were only there to relax… Yeah right, like we would ever turn down a chance to be on camera (we admit it, we’re hams)! The cameraman Van filmed us talking to crew members, getting room service in our robes, even lifting weights, jogging, and doing yoga in the fitness center! (If only we weren’t so shy). We can’t wait to see the final show, we’ll let you know when and where to watch it!

Each morning we were treated to bountiful breakfasts, each night to delicious dinners. The excursions were fantastic, it was like stepping into whole new worlds each and every day. The arrangements were first-class, the service was excellent, and the company with our two fellow travelers was truly the best! Ron and Lynette even got trained (by guess who) on how to play chess! Ron emerged victorious from their first (very long) contest! 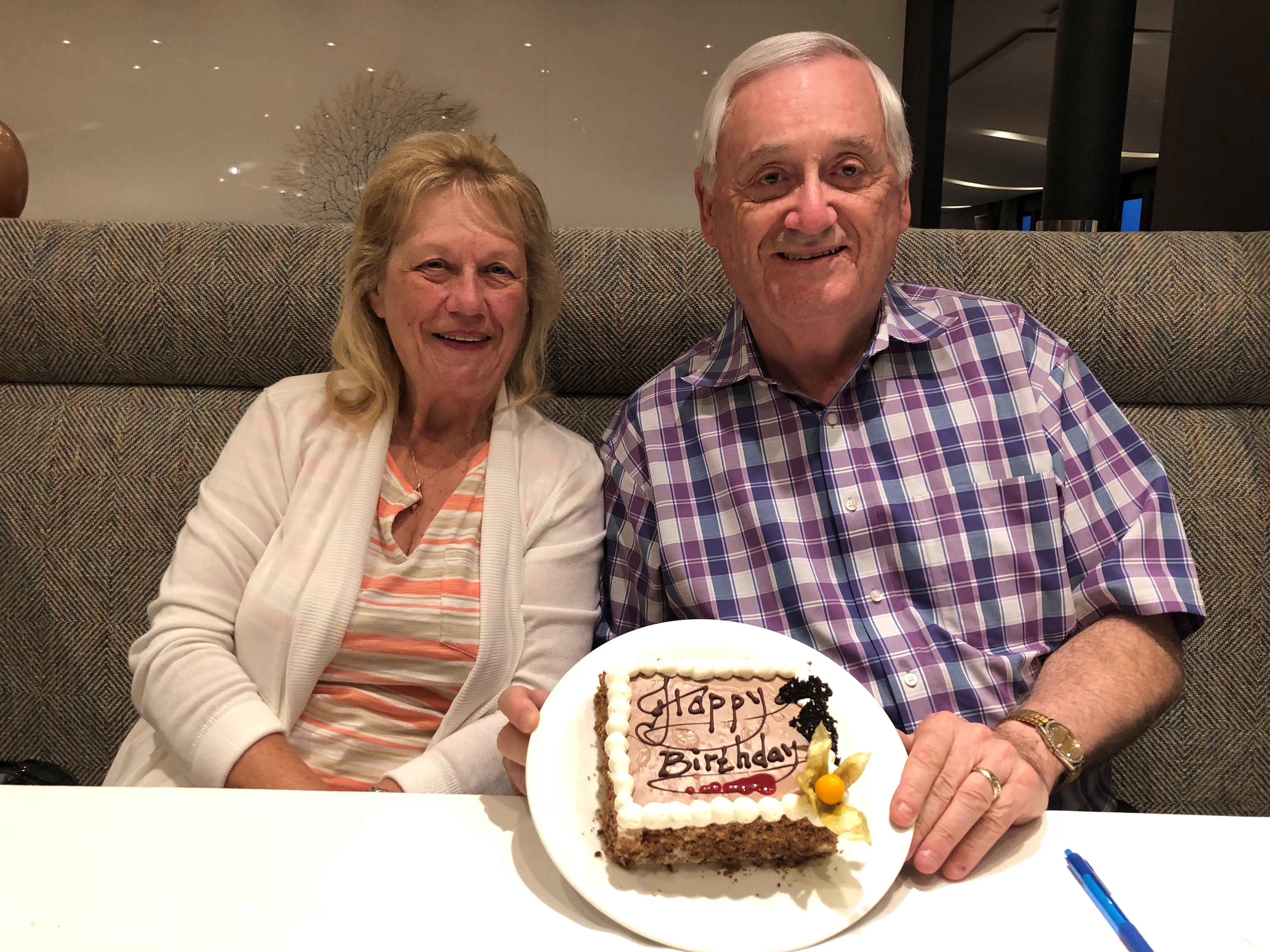 Coincidentally it was also Ron’s Birthday that day, September 3! We really embarrassed him by getting the staff to sing Happy Birthday the night before and then in the morning again too! (You know we love you, Ron!)

We hoped for the European vacation of a lifetime with our great friends, Ron and Beverly LeGrand. What we got was…EXACTLY THAT!  We’ll always remember Ron on the Rhine!

One Response to On the Rhine River with Ron! by The Wolff Couple