10 Best Christmas Movies Ever: Elf, Home Alone, and More Holiday Classics That Made Our List!

Warm up the hot chocolate and cuddle around the fire. It’s Christmas and the perfect occasion for holiday fun favorites! 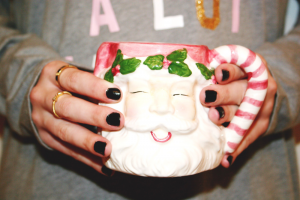 Perhaps you’d like to travel through the seven levels of the Candy Cane Forest with Will Ferrell and Zooey Deschanel in the hilarious family favorite Elf. 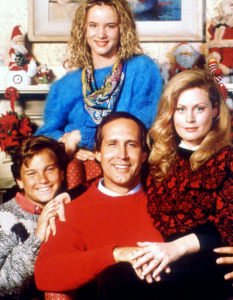 Maybe you want a little family drama, as Chevy Chase makes his wife and kids stay home for the holidays in Christmas Vacation.

Finally, how can we forget Macaulay Culkin’s scary night in Home Alone when he’s forced to defend his home from bumbling burglars? Brace yourselves movie fans, tissues may be needed for this classic flick.
We’re just getting started when it comes to holiday favorites. Take a look at our picks for the 10 Best Christmas Movies Ever and tell us which film you’ll be watching later this evening.

10. Christmas Vacation
Years before his Community drama, Chevy Chase created family drama (and comedy!) with the Griswolds’ trips to Walley World, Europe, and Vegas. For this gleefully goofy Vacation, patriarch Clark keeps the clan at home for an old-fashioned family Christmas. Of course, that’s a recipe for disaster—like fruitcake, but much tastier.
Warner Bros. Pictures

7. Scrooged
There are umpteen versions of Dickens’ timeless A Christmas Carol, but we’ll take this high-spirited update from 1988. Bill Murray, at his snarky best, stars as a cynically selfish TV exec haunted by three ghosts, including a sucker-punching, toaster-wielding Carol Kane. He’s also smitten by plucky Karen Allen, who could make any Grinch’s heart grow three sizes.
Mirage Studios

6. Elf
Will Ferrell is elfing awesome as raised-by-elves Buddy, who prances into Manhattan searching for his true identity and biological dad (James Caan). Just the sight of gangly Ferrell in elf-wear jingles us all the way, but then this Santa’s-helper flick manages to deliver Buddy-sized chuckles and cheer. To all a good movie night!
New Line Cinema

5. The Nightmare Before Christmas
Have yourself a scary little Christmas with this gothed-out goodie from macabre master Tim Burton. Ghosts, goblins, and ghouls haunt Halloween Town, where Jack Skellington yearns to learn about the Christmas spirit. Your eyes will pop from their sockets at the gore-geous stop-motion, while your bony toes tap to the catchy Danny Elfman score. Frightastic!
Touchstone Pictures

4. White Christmas
Irving Berlin’s song “White Christmas” debuted in Holiday Inn (1942) and became so popular it inspired this 1954 musical extravaganza—just like the ones we used to know… The let’s-put-on-a-show plot is serviceable, but the song-and-dance numbers make Christmas sparkle like a twinkly tree-topper. Look for Bing Crosby and Danny Kaye doing drag (drag!) as “Sisters.”
Paramount Pictures

3. A Christmas Story
“You’ll shoot your eye out!” Despite that repeated warning, bespectacled Ralphie (Peter Billingsley) really wants a Red Ryder BB gun for Christmas. Be sure to drink your Ovaltine while enjoying this 1983 favorite, with classic gags about a pink bunny suit, tacky leg lamp, and tongue frozen to a flagpole. We triple-dog-dare you not to laugh!
MGM

2. It’s a Wonderful Life
Yeah, the Frank Capra classic gets played to death, but there’s a reason Life lives on and on in our hearts—and our cable lineup. The uplifting story of touched-by-an-angel George Bailey (James Stewart) warms the cockles more than a steaming mug of hot cocoa. “Attaboy, Clarence!”
Liberty Films 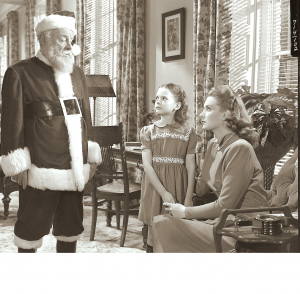 Actors from Richard Attenborough to Tim Allen have suited up to play Saint Nick, but for our Christmas green, Edmund Gwenn’s turn as the bearded fat guy totally takes the cake—and cookies! In this 1947 charmer, Gwenn convinces precocious Natalie Wood and even the U.S. Postal Service that he’s the real deal. Oscar voters believed too, awarding Gwenn Best Supporting Actor.
20th Century FOX

This entry was posted in Just For Fun, Resources. Bookmark the permalink.

3 Responses to 10 Best Christmas Movies Ever: