“Ugly is the New Pretty” by Tony Pearl

Warm Weather is finally upon us! Time to get ready for those Summer vacations – trips to the beach, cookouts, swimming, boating, golf, tennis, and everything else that we love to do outside when the weather is warm.

Of course, if you live in the South, Southern California, or a place like Phoenix, you’re used to having nice weather all year ’round. And I hate you. 🙂

But, if you’re like me and live in a place where you get all four seasons (yay), you can appreciate how the change in weather can also trigger a change in perspective.

Long intro aside, there’s something that I’ve been noticing over the past few years when it comes to marketing…

Ugly is the New Pretty 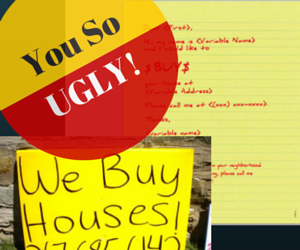 What does that mean? It means that a lot of the usual, conventional, traditional marketing pieces or campaigns that USED to work for many years… simply don’t work much anymore these days.

There’s an air of ‘counter-corporatism’ that’s fast taking over our country.

Things that used to get results, like pretty pictures w/ glossy coverings, or words like “When one desires the very best…” and other crap like that all have their place. That stuff is usually associated with image or branding style of marketing.  Basically, it’s stuff that nobody cares about except the fat cat CEO types who puff cigars, sip scotch, and tell people what to do all day.

If you ever think about marketing like that, you might as well build a fire with $100 bills to keep yourself warm, because that’s basically what you’re doing with your money.

BUT…if you want to get RESULTS, or a measurable Return On Investment of your marketing money, then listen up, because what you’re about to hear here flies in the face of conventional wisdom…which is one of the reasons I love it so much!

MOST “Pretty” marketing sucks. It’s so busy “looking good” that most people’s eyes just glance right over it. Most businesses try so hard to have their marketing pieces look nice that no one notices them anymore.

Why? Because we’re CONSTANTLY bombarded all day, every day (and night) by all these “me too” marketers, jockeying for your attention so that they can sell you something.

It gets to the point where your brain just ignores it, because it’s either stupid, irrelevant, or you’re just tired of trying to be sold to.  Make sense?

BUT… when you see something that looks so UGLY or DIFFERENT, your brain pattern is interrupted, your eyeballs just can’t look away, and you’re almost forced into paying attention!

Let me ask you something. Have you ever seen those bandit signs on the side of the road? (Maybe you’ve put some up yourself!) What do MOST of them look like? They probably have nice lettering, were professionally done, and look pretty good, right? Especially the ones done by Real Estate agents and (gasp) politicians. Don’t you just love those (NOT!)?

After a while, you don’t even notice them anymore, right? I know I don’t.

But then… up ahead in the intersection, your eyes can’t help but to notice… a Bandit Sign that was HAND-WRITTEN! And the handwriting isn’t even that good! What does your brain do?

Chances are that your eyeballs are sucked right to it; you notice the sign & start to process the message! Why? Because it’s not just different – it’s UGLY! Your brain is forced to recognize it and make a new neural association.

So, people notice these signs. They process the message. They write the number down, and then they call you. Result (if it’s your sign): You get a lead. You buy a house. Nice.

Another great example is the notorious Yellow Letter. Before my ol’ buddy John McNeil ‘discovered’ this method, most people who sent out direct mail pieces in search of motivated seller leads would send out well-written letters with halfway-decent copy. These letters would almost always have the usual computer-generated nice font in black ink on white paper.

The industry standard for direct mail letters like that is around 1%. The yellow letter has seen results up to 35%!!  Why? Again, because it’s ‘ugly’ and different. It’s handwritten (either real or computer generated so that you can’t tell the difference) in red, blue or black ink. It’s written on yellow paper that looks like it was just torn off of a pad. And it’s delivered in an invitation envelope…NOT a traditional #10, like everybody else uses.

So, people open it. They read it. They ask themselves, “What the…?” Then they pick up the phone and call you! Or, better yet, they call your live answering company or Virtual Assistant. Yes, some people may be upset when they call, saying that their house is not for sale. Oh well. Be happy that’s not YOU having a bad day and let your system deal with it.

But you’ll get calls. And that’s the goal with your marketing campaigns – to get people to notice you, process the message, and take action! Chances are that you’ll get a few decent, workable leads and buy a house or two as a result.

Here’s something else I heard recently. They say that most people don’t remember other people’s faces because most people just sort of ‘blend in.’ However, people who were considered to be “ugly” were remembered more often than most ‘average’ people! Why is that? You should know this by now – it’s because they were considered to be so different than most that they stood out and got noticed!

So, if someone remembers your face the next time you see them, you might want to ask yourself why! 😉

Listen, “Ugly Marketing” may not be the best option for your long-term branding or ‘image’ that you might be trying to create for your multi-million-dollar corporation that you’re trading on the New York Stock Exchange. But if you’re a small business owner trying to dominate your local market by standing out in ways that get your prospects to not only notice you but take action, this may be just what you need.

Make yourself look good, but make your marketing look UGLY to stand out, because…

Being “Ugly” just might get you a ticket to the dance this time!

So, think about this while you’re enjoying your summer. And make sure you wear your sunscreen and water wings when you go swimming!

See you next month,