Home » Resources » Blog » Get Out of Your Comfort Zone

Get Out of Your Comfort Zone

Everyone has a comfort level in which they live and work. It is determined by several factors and can be changed with practice and time. We have a choice of what we do each day, how we spend our time, and how much money we make. 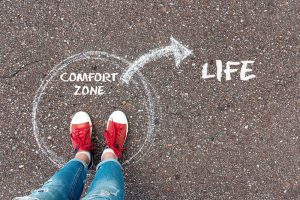 This may come as a surprise to some people who are convinced their income is someone else’s choice, not theirs. Nothing could be further from the truth. Your income is the result of one thing and one thing only….

What you choose to do with your time.

“But Ron, you don’t understand. I have a job. I’m not in control of my salary; my boss is. He tells me when to come to work and how much I can make.” I guess you’re right. You’re not in control and maybe you never will be.

At least, not without a major attitude change. Listen, if you’re reading this article it means you know the opportunities available to you as a real estate entrepreneur. So if you’re still employed, you’ve chosen to do so. No one forced you. It’s your decision and therefore you have chosen to exchange dollars for time which is a sure-fire recipe for being broke.

Does this mean I think everyone should immediately quit their jobs and start doing real estate? Absolutely not. This business is not for everyone. Being in any business for yourself is also not for everyone. However, if you’re reading this, my guess is you’re not in that group. You want more out of life than a dull job and you want to see some real money for a change. Am I right?

Maybe you aren’t employed anymore and you’re feeling pretty smug because you’re now on your own flying free. No job! No boss! No traffic jams! No one giving you orders! Well, congratulations! But before you get too full of yourself maybe we’d better look a little closer. You see, there is a down side. You have no job which means no paycheck and no boss making decisions for you. You’re on your own to decide what you do every day and worse. No one to blame when you screw up.

It’s you against the world. You’re on fire. You haven’t been this excited in a long time. No place to report in the morning. You can do what you darn well please. You see, my friend, that’s what scares me. What will you do with all this new-found freedom? How long will it be before you fill your days up with activities that accomplish nothing except filling your days?

If you’re not careful your poor time management habits and low expectations will lead you right back to doing no more than just making a living. You’ll replace your old job with a new one and simply change bosses. A new dufus will replace the old one.

Have I hurt your feelings? Tough! Get over it. Remember, I’m on your side. We’re in this together and it’s my job to help make you better than all the employed or unemployed drones just drifting out there waiting to die. Just because you don’t have a job anymore doesn’t mean you’re going to be rich. Rich people don’t waste all day thinking like a job slave and spend their time killing time. The rich focus on what produces the most revenue with the least work.

I’m no different than you…

If it will make you feel any better, I’m no different than you. I wasted a lot of years killing time. That’s why I’m so adamant that you don’t do the same. So, let’s talk about getting off to a good start. If you’re way past a start, let’s discuss amending your ways so you can begin making more money.

Incidentally, that has nothing to do with having more time. It involves using that time the best way you can. Whether you’re part time or full time you, have a choice of the deals you participate in. You can either make a few thousand dollars because you feel comfortable with the easy stuff, or you can make a hundred times more on the same deal using no more money or extra time to do so. Again, you get to choose. No one else. Let me explain.

Get out of your comfort zone!

For years I dealt with low-priced junkers, usually in low income areas. I’d either wholesale for $2,000 to $6,000 or retail for $15,000 to $20,000. It was all I knew, my comfort zone. The thought of buying anything worth over $60,000 petrified me. I wouldn’t even let myself think about it. I was happy making two or three times over what I used to make from my job so why bother doing anything better and upset the apple cart? Besides, I had bought and sold hundreds of houses. I had to be smarter than anyone else I knew.

The more money I made the more I allowed myself to think bigger. Gradually I learned there was more to the business than cheap junkers and small dollars. I began to learn the “pretty house” business. My threshold kept rising higher and higher as I learned that it’s just as easy to make more as it is to make less.

Now, you may be thinking it was easier to make more because I had more to work with. That’s the same stupid thinking which held me back all those years. Here’s some hot news right off the wire:

Recently I decided to work some deals with students in all parts of the country. When I see them at events I make them the offer to call me to discuss those larger house deals they’re presently throwing away, because the numbers scare them. I tell them if the deal was doable, I might agree to be their partner.

Consequently, some called me with deals. At this time, I have about ten or fifteen deals in various stages of production. Let me use a couple of deals to prove my point. In many cases, including yours my friend, it’s not the lack of money holding you back, it’s the lack of knowledge on how to structure the deals so you don’t need money!

During this time, the owner called my student and finally said he’d deed the house to him if he wished. The student let the deal pass because the numbers were scary and the exit strategy wasn’t clear.

It costs nothing to aim high. But wait! That’s only one little deal. I personally negotiated another student deal in Orlando. The appraisal the seller gave us was one year old at $910,000. He agreed to sell for what he owes at $513,000. The house is in a gated community on 2.8 acres with a screened in pool and tennis court. It has 7,500 square feet of beautiful living space and looks even nicer since the seller is leaving $25,000 worth of furniture.

We’re raising the money to buy from a private lender who learned the business from me several years ago. This same lender is available to anyone in his area. Nothing special happened because I was involved. Nothing, except the deal is now done instead of lost.

We did not need a dime of our own money or credit to do this deal. It just took guts and a clear vision of the exit strategy. More than anything, it took expanding out of our comfort zone.

What’s the next deal? I don’t know but I bet it’s better than the last house you flipped. I’m sure it’s better than your last year’s W-2 showed. But don’t worry. I can’t expect something like this to come your way, can I? After all, there’s too much competition where you live and it probably won’t work there anyway. Surely there aren’t any sellers with more expensive houses that would even consider selling for less than retail price.

Yes, I’m being sarcastic. At the same time, I hope I’m making a point you soon won’t forget: Do what everyone else does and you can expect to get what they get, Do what they fear, and they’ll wish they had what you’ve got.

I just made that up, looks like a good overhead to me. Seriously, don’t you think it’s time to get your head out of the sand and begin to think much bigger? It’s free. Figure out what scares you and fix it. If it’s lack of money, it can and will be fixed with more knowledge.

I think you get the picture.

Speaking of millionaires, how many of these kinds of deals do you need per year to make a million bucks? Not many. Good news! They’re more plentiful and easier to do than junkers. All you need to do is expand your comfort zone just a little and increase your ability to construct and present offers. You can make more or continue to make less. It’s your choice.

This entry was posted in Blog, Resources. Bookmark the permalink.

15 Responses to Get Out of Your Comfort Zone