Home » Resources » Articles And Reports » “The Real Meaning of ‘The Twelve Days of Christmas’” by Father Edward T. Dowling

“The Real Meaning of ‘The Twelve Days of Christmas’” by Father Edward T. Dowling 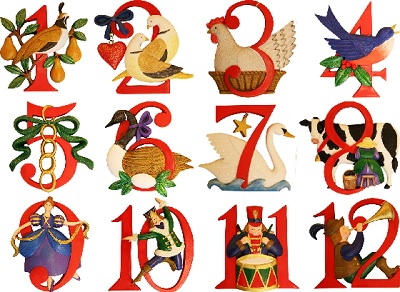 I’m sure you have all heard the Christmas carol, “The Twelve Days of Christmas,” with its haunting melody. The carol dates back to the 16th century and its precise author is unknown. It has generally been assumed to consist of twelve nonsense verses built around a pretty melody. But in a fascinating article in Our Sunday Visitor (12/20/92), Fr. Gilhooley, a chaplain at St. Mary’s College, informs us that the carol was written by the English Jesuits of the 16th century as a catechetical device and it is far from filled with nonsensical verses.

The carol is akin to the apocalyptic literature of Scripture that used obscure symbols to hide its true meaning from the enemy in time of persecution. To understand the background that gave rise to the carol, let us look briefly at the history of Catholicism in 16th century England.

When Henry VIII was rebuffed by Rome in his bid to divorce Catherine of Aragon to marry Anne Boleyn, he declared himself head of the Church in England replacing the Pope and demanded that all swear an oath of allegiance to him as such. St. Thomas More, the Chancellor of the Realm, the equivalent of the Prime Minister today, refused the oath supporting the elimination of the Pope’s authority and Henry had him publicly beheaded. Catholic convents and monasteries were closed and looted. The situation was worse under his son, Edward VI, and better during the short reign of Catherine’s daughter, Mary Tudor. She was succeeded by her half-sister Elizabeth I, an ardent Protestant, the daughter of Anne Boleyn. The practice of the Catholic faith was banned. Priests were exiled and forbidden under pain of death from returning or performing the sacraments. It was a desperate, dreadful time.

But many priests risked their lives to come back and minister to the flock and many lay Catholics likewise risked their lives and fortunes to hear Mass and have their children baptized. Wealthy families built hiding places, called priests’ holes, in their homes to hide priests in case their homes were raided by the secret police.

The story is told of one priest who was almost caught in a surprise raid. He had just time to squeeze into his hole before the police broke in on the family. The police had obviously received a tip because they went right to the fireplace where the priest’s hole was located. But try as they might, they couldn’t find the entrance. Then in their frustration they ordered a fire to be lit to drive out the priest. When he didn’t emerge, because to do so would subject the host family to prison or death, they ordered more logs on the fire. Eventually all were driven from the room by the intense heat and the police left in disgust. The family rushed to get the priest out of the hole but he was already dead, baked alive. He gave his life under cruel circumstances to save those whom he had come to serve. And he was only one of many.

With this as a background we can see the need for secrecy and deception. “The Twelve Days of Christmas” was written to educate the faithful in the doctrines of the faith and yet not be obvious to the persecutors. The numbers are simply a mnemonic to help Catholics remember some basic facts. Recall the words of the song. “On the twelfth day of Christmas, my true love gave to me: twelve lords a leaping, eleven pipers piping, ten ladies dancing, nine drummers drumming, eight maids a milking, seven swans a swimming, six geese a laying, five golden rings, four calling birds, three French hens, two turtle doves, and a partridge in a pear tree.”

“The Twelve Days of Christmas” celebrates the official Christmas season which starts liturgically on Christmas Day and ends twelve days later on the Feast of the Epiphany. “My true love” refers to God, “me” is the individual Catholic. The “twelve lords a leaping” are the twelve basic beliefs of the Catholic Church as outlined in the Apostles Creed. The “eleven pipers piping” are the eleven Apostles who remained faithful after the treachery of Judas. The “ten ladies dancing” are the Ten Commandments. The “nine drummers drumming” are the nine choirs of angels which in those days of class distinction were thought important. The “eight maids a milking” are the Eight Beatitudes. The “seven swans a swimming” are the Seven Sacraments. The “six geese a laying” are the Six Commandments of the Church or the six days of creation. The “five golden rings” are the first five books of the Old Testament called the Torah which are generally considered the most sacred and important of all the Old Testament. The “four calling birds” are the Four Gospels. The “three French hens” are the Three Persons in God or the three gifts of the Wise Men. The “two turtle doves” represent the two natures in Jesus: human and divine or the two Testaments, Old and New. The “partridge” is the piece de resistance, Jesus himself, and the “pear tree” is the Cross.

One Response to “The Real Meaning of ‘The Twelve Days of Christmas’” by Father Edward T. Dowling